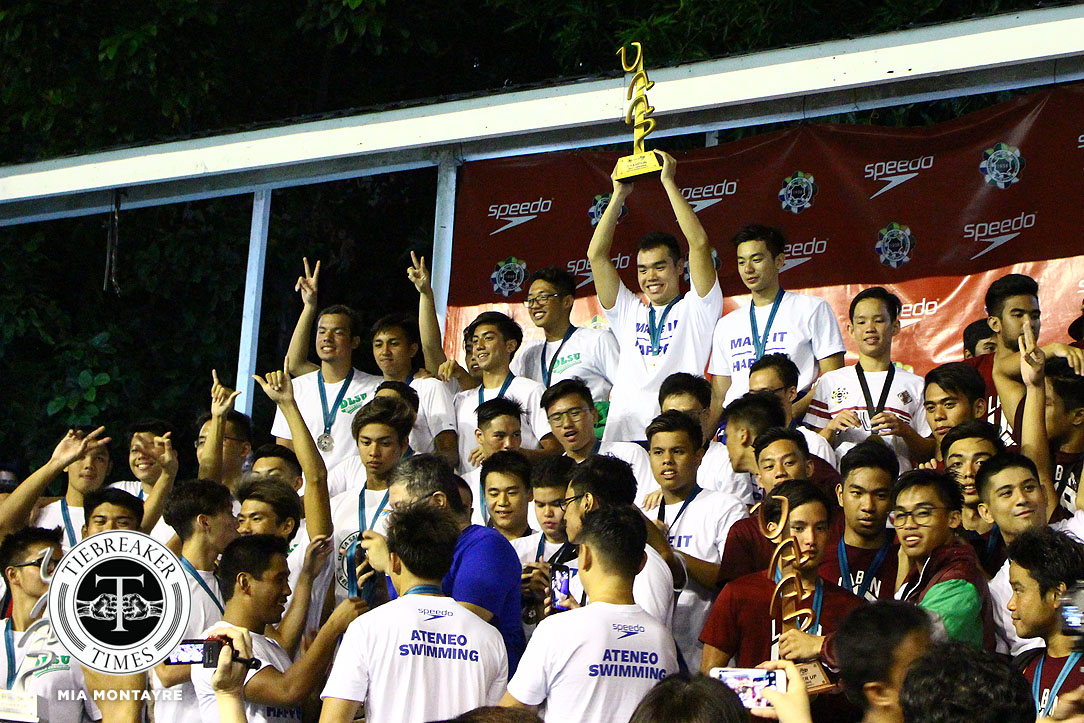 Even as the Ateneo de Manila University had already secured a large margin to comfortably bag their fourth straight men’s swimming title in the 80th UAAP Swimming Championships before the final day of action even began, team captain Aldo Batungbacal made sure his teammates pushed themselves further in line with their team’s mantra: “Be The Bar.”

As a result, the Blue Eagles nearly swept all gold medals for the day, topping five of the six events at stake. Batungbacal himself accounted for two of those five, not only ruling the 1500m Freestyle in 16:42.42 and 200m Breaststroke in 2:20.34, but also resetting his old UAAP marks in both events.

Ateneo’s Jessie Lacuna — a London and Rio Olympics veteran, two-time UAAP MVP, and Season 78 Athlete of the Year — did not want to be left behind, as he swam another record performance in the 200m Butterfly, erasing his old mark of 2:03.93 with a new time of 2:02.57.

In four seasons swimming for the blue and white, Lacuna has not lost any event, winning his 26th individual gold medal as Season 80 ended. He also has two relay gold medals under his belt. Thus, with an unblemished seventh gold medal in Season 80, he was once again named the season’s Most Valuable Player.

Batungbacal and Lacuna also had plenty of help from the rest of the Blue Eagles. Breaststrokers Paolo Mutuc (2:25.83) and Carlo Silva (2:27.84) teamed up with Batungbacal to complete a podium sweep of the 200m Breaststroke. The trio — who rose to the challenge of competitors from other schools coming into this UAAP season — also swept the podium in the 50m Breaststroke and 100m Breaststroke events in the previous days. Ateneo’s domination of the breaststroke events is a rare feat that may not be matched in a long time.

UAAP 79 Rookie of the Year Miguel Arellano also contributed in the 200m Butterfly by finishing third in 2:14.16. Rookie sensations Miguel Barlisan and Akiva Cariño tied for second in the 50m Backstroke (28.31), while another rookie Leandre Buhain took the bronze medal in the 50m Freestyle with a time of 24.15.

Barlisan then returned to the pool for the 50m Freestyle to claim his second gold medal by clocking 23.83. With two gold medals, one silver medal, one bronze medal and 62 points in total, Barlisan successfully filled the void left by former king eagle Axel Ngui en route to securing the Rookie of the Year award.

The Blue Eagles then capped off their domination of Season 80 by ruling the final event – 4x100m Medley Relay. Cariño, Silva, Arellano and Buhain paid tribute to graduating seniors Batungbacal, Mutuc and Jeric Santos by winning in 4:03.98. The De La Salle University were second at 4:05.25, while the University of the Philippines were third at 4:11.82.

While Santos had already played out his eligibility, both Batungbacal and Mutuc have expressed their intention to end their UAAP careers despite still being eligible for one more year. Should Batungbacal proceed with his plan to forgo his final playing year, he can enjoy the distinction of being undefeated in the UAAP, as he has now won eight straight UAAP championships, dating back to his high school years representing the Ateneo High School from UAAP Season 73.

All in all, Ateneo collected 567 points; the closest challenger, DLSU, only amassed 328 points. UP were third with 191 points. This is Ateneo’s fourth straight UAAP championship and their fifth overall, with the breakthrough title coming in Season 75.

Rookie of the Year race