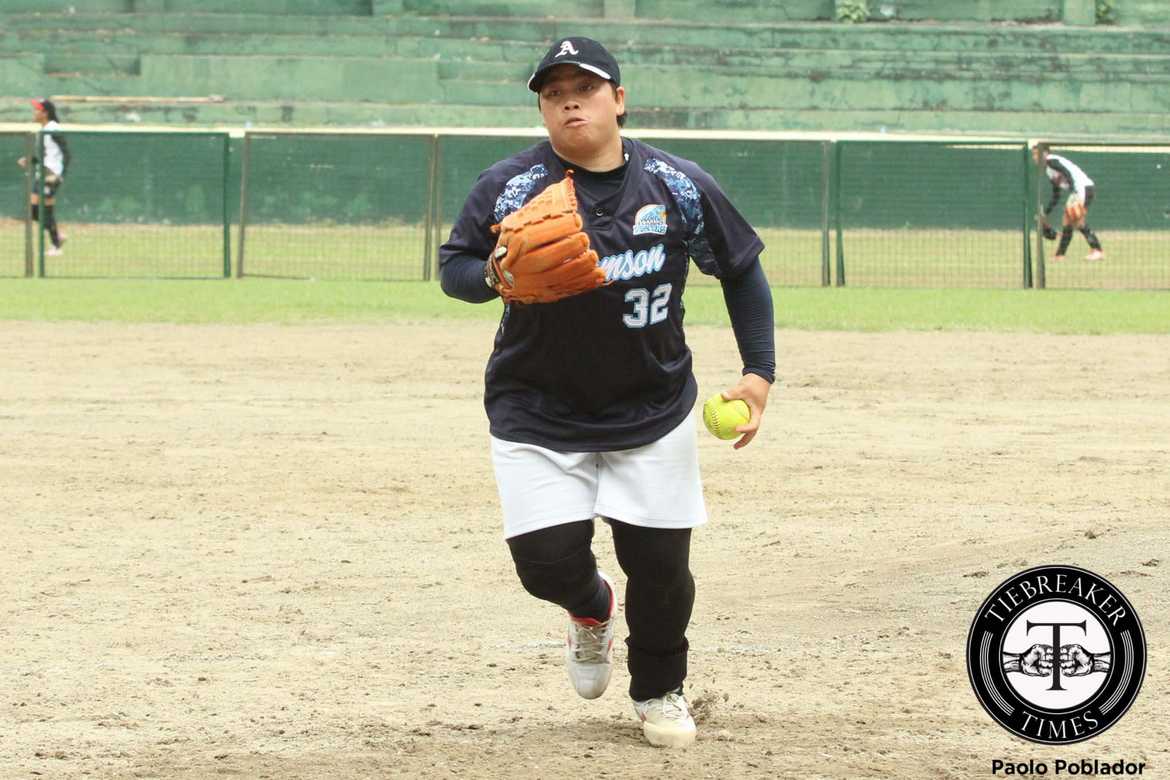 In their second round encounter, the Lady Falcons struggled with their offensive support that kept the game close with ace pitcher Dimpo Benjamen and the Lady Falcons eventually taking a 4-2 win to be just a win shy of their sixth straight elimination round sweep Monday morning at the Rizal Memorial Baseball Stadium.

The Lady Falcons were able to get on the board during the first inning. With one out, a costly throwing error by La Salle’s second basewoman Mary Joy Son gave Lorna Adorable base. After a flyout of the next batter, Annalie Benjamen was able to gain base due to balls. Right fielder Gelyn Lamata then popped a two-out single to center field that paved the way for an Adorable run.

During the third inning, the Ana Santiago-mentored squad had the bases loaded with two outs. However, last season’s home run queen Sabobo fouled the ball that was easily caught by catcher Jen Gomez to end the inning and strand all three runners.

On the other end, Dimpo Benjamen and the Adamson fielding limited the Lady Batters to just a single hit during the first five innings of the game. The reigning MVP had six strikeouts during that span while the infield combined for eight putouts.

Benjamen and Adorable provided two more runs during the fifth inning that extended the Adamson lead to three runs after a 2 RBI single by Lamata with two outs. Then, at the sixth inning, it was the bottom of the batting order that provided another run for the defending champions. With two outs, Riflayca Basa connected with a base hit to salvage the inning. After consecutive errors by first basewoman Pat Belarmino against Riezel Calumbres and Adorable, Lamata was brought home. However, a fielders choice knocked off Calumbres for third out.

In the bottom end of the sixth, the Lady Batters rallied back to cut the deficit. Benjamen accidentally hit Sachiel Amores with a stray pitch to open the inning. A double by Son followed that gave La Salle two runners. A wild pitch by Benjamen then paved the way for Amores to score a run. After a ground out of the next batter, a sacrifice fly by Gomez to right field gave Son another run to cut the Adamson lead to just two runs.

However, the fielding of Adamson was just too disciplined as they displayed crisp fielding in the final inning to seal the game.

Benjamen pitched a full game once more. She had six strikeouts in the game and gave up just two hits. However, the grueling grind of the season has been taking its toll on the reigning MVP.

Gelyn Lamata had the highest batting average for the Lady Falcons in this game in going 2 of 3. She had two RBIs in the game that led to runs for Benjamen and Adorable. On the defensive end, first basewoman Riezel Calumbres and catcher Angelie Ursabia combined for ten putouts in the game.

The Adamson Lady Falcons face the UST Tiger Softbelles in the final game of the day on Wednesday, March 2 at 11:00am. On the other hand, the DLSU Lady Batters fight for their playoff lives as they face the UE Lady Warriors at 9:00am.

An Adamson win on Wednesday, March 2 will automatically give the Lady Falcons a Finals berth with a thrice-to-beat incentive.

A loss though will not only break the greatest streak in Philippine sports today but also force a Final Four format with the Lady Falcons facing the fourth seeded team (DLSU/UE/UP).

a.) A DLSU win and a UP loss gives La Salle fourth seed.
b.) A DLSU loss and a UP win gives UP fourth seed.
c.)  A DLSU win and a UP win ties them for fourth seed with both squads facing each other in a playoff on Saturday, March 5.
d.) A UP loss and a UE win/DLSU loss complicates things as UP/UE/DLSU will be tied at fourth with a 4-8 slate. The quotient system will be applied with the bottom two teams facing off in a do-or-die game with the winner advance to face the top quotient team.