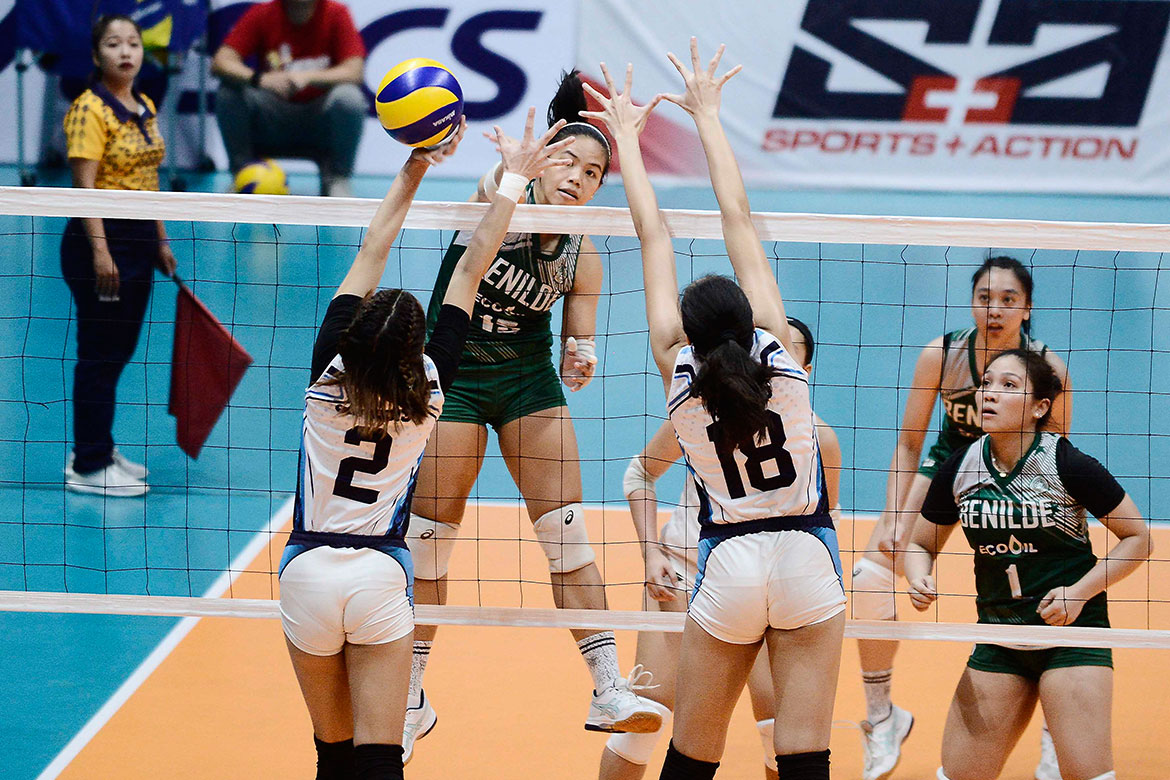 College of St. Benilde averted a meltdown of epic proportions to draw first blood against the erstwhile-unbeaten Adamson in Game One of the 2019 PVL Collegiate Conference semifinals, Sunday.

Behind the troika of Klarisa Abriam, Gayle Pascual, and Mycah Go, St. Benilde sprinted out of the gates of the decisive fifth frame and snatched a 10-6 advantage.

Trisha Genesis, though, refused to let Adamson go down without a fight. She took matters into her own hands, hammering down four crucial blows in a 4-1 spurt that pulled her team to within a point at 10-11.

However, Grace Toring — who was instrumental in the Lady Falcons’ fightback in the third and fourth frames — coughed a scoring attempt. This changed the complexion of the cardiac affair as Genesis rotated to the back row.

While Toring atoned to her mistake and strung back-to-back points to knot the match at 12, Abriam nudged the scales to St. Benilde’s favor with a soft touch down the middle.

Lucille Almonte responded with a spike that went off the block to forge another deadlock at 13. Not to be denied, Abriam delivered another off speedball to buoy St. Benilde at match point, before Rizza Cruz muffed the potential equalizer as she botched an attempt with a net infraction.

Anticlimactic as the win was, though, it still propelled the Lady Blazers closer to a finals berth.

Abriam razed Adamson to the ground with 27 points built on 25 attacks. She also collected 16 excellent digs to post a double-double performance.

Meanwhile, Pascual had a scintillating outing of her own. She torched the opposition with 19 attacks and three kill blocks for 23 markers.

Complimenting the prolific scoring duo of St. Benilde was Go, who rained down three services aces to finish with 12 points. She was also all over the place on the defensive end, putting up a whopping 44 excellent receptions.

St. Benilde playmaker Jewel Lai churned out the offense for the only NCAA squad in PVL Collegiate Final Four. She tossed 27 excellent sets on top of three points.

Still, despite a convincing performance in the rubber set, St. Benilde head coach Jerry Yee had to jolt his ward to their senses after losing hold of a two-set buffer.

Ceasa Pinar, who wounded up with a game-high 28 points, was held scoreless in the final chapter of a classic thriller. She had 20 hits, five kill blocks and three service aces, laced with 15 excellent digs in a losing cause.

Genesis chimed in 17 markers and 24 excellent receptions that went down the drain, while Toring supplied 16 to no avail. Rizza Cruz and Almonte managed 13 and 10 points, respectively.

Adamson setter Louie Romero dished out 40 excellent sets for the Lady Falcons, who suffered their first defeat in the conference.

Game Two is on Wednesday, October 2, at the same venue.