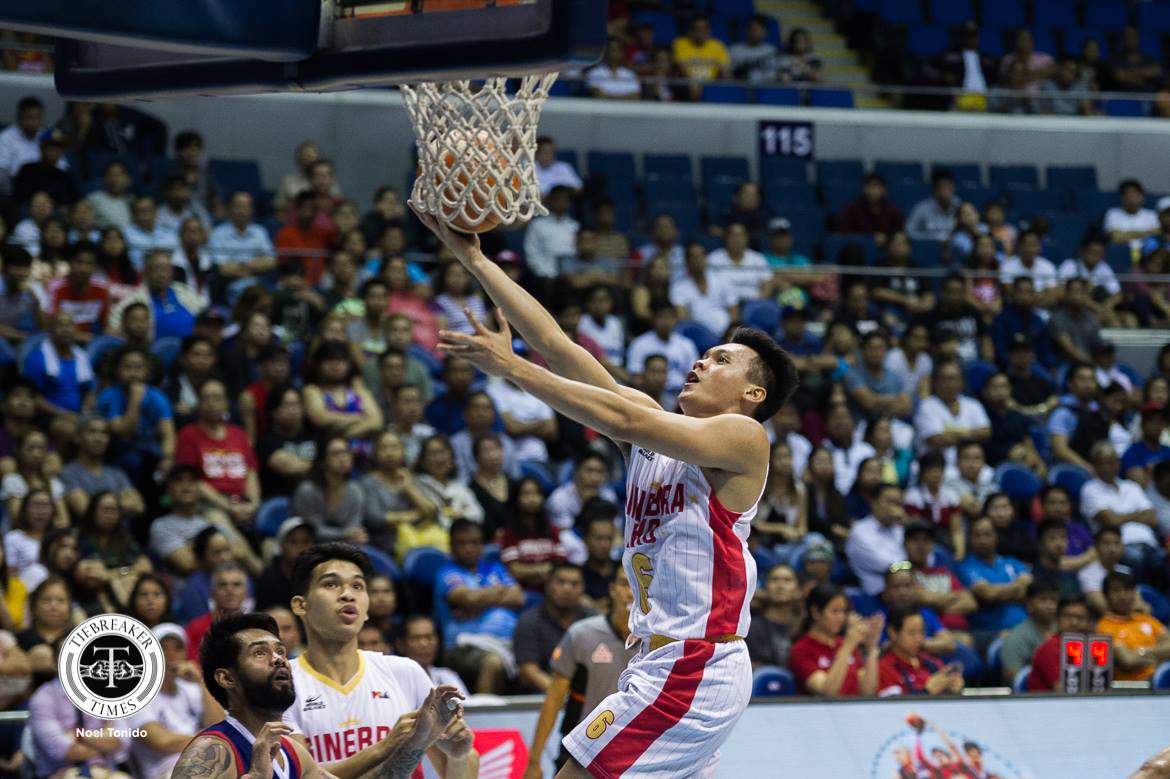 The Barangay Ginebra San Miguel gave new face Jeff Chan a warm welcome to their fort by beating the Columbian Dyip, 134-107, for their third straight win in the 2018 Commissioner’s Cup, Wednesday night at the SMART Araneta Coliseum.

The Gin Kings improved to 4-5, tied with the Magnolia Hotshots and the GlobalPort Batang Pier in the sixth spot of the team standings. The Dyip, meanwhile, dropped to 4-6, tied with the Phoenix Fuel Masters.

“They jumped out on us early, until our defense settled in and helped us break away,” said Ginebra head coach Tim Cone. “The winning streak doesn’t really mean anything… We can still get a couple of levels higher.”

After a tight bout in the first 12 minutes, Ginebra gained footing in the second frame. Back-to-back baskets by Japeth Aguilar late in the period propelled them to a 62-49 lead at the half, which they never gave up the rest of the way.

Ginebra’s lead rose to as high as 30, 119-89, after a Brownlee dunk approaching the six-minute mark of the final canto.

LA Tenorio finished with 16 points and 10 assists in the win. Scottie Thompson registered his third PBA triple-double as he collected 12 points, 12 rebounds, and 10 dimes. Greg Slaughter chimed in 10 markers and six boards.

Mark Caguioa finished with just eight points – a significant number, since it moved him into the Top 15 of the league’s all-time scoring list. The former league Most Valuable Player now has a total of 9,931 points.

Columbian, despite the loss, had six players finishing in double figures. John Fields led the pack with 30 points, on top of 16 rebounds and five assists. Rashawn McCarthy scored 17, while Ronald Tubid made 15.

Earlier tonight, Phoenix had obliterated GlobalPort, 135-108. As per the league’s head statistician Fidel Mangonon, the last time both PBA games in a doubleheader were decided by at least 27 points happened in 2000.

About 18 years ago, the Alaska Aces massacred Tanduay, 119-71, in the battle for third place, and the San Miguel Beermen demolished the Sta. Lucia Realtors, 106-78, in Game 1 of best-of-seven Commissioner’s Cup Finals.

Ginebra will have their hands full this Sunday, June 24, as they battle the Alaska Aces at 6:45 PM. Columbian, on the other hand, will face GlobalPort this Friday, June 22, at 4:30 PM. Both games are still at the Big Dome.