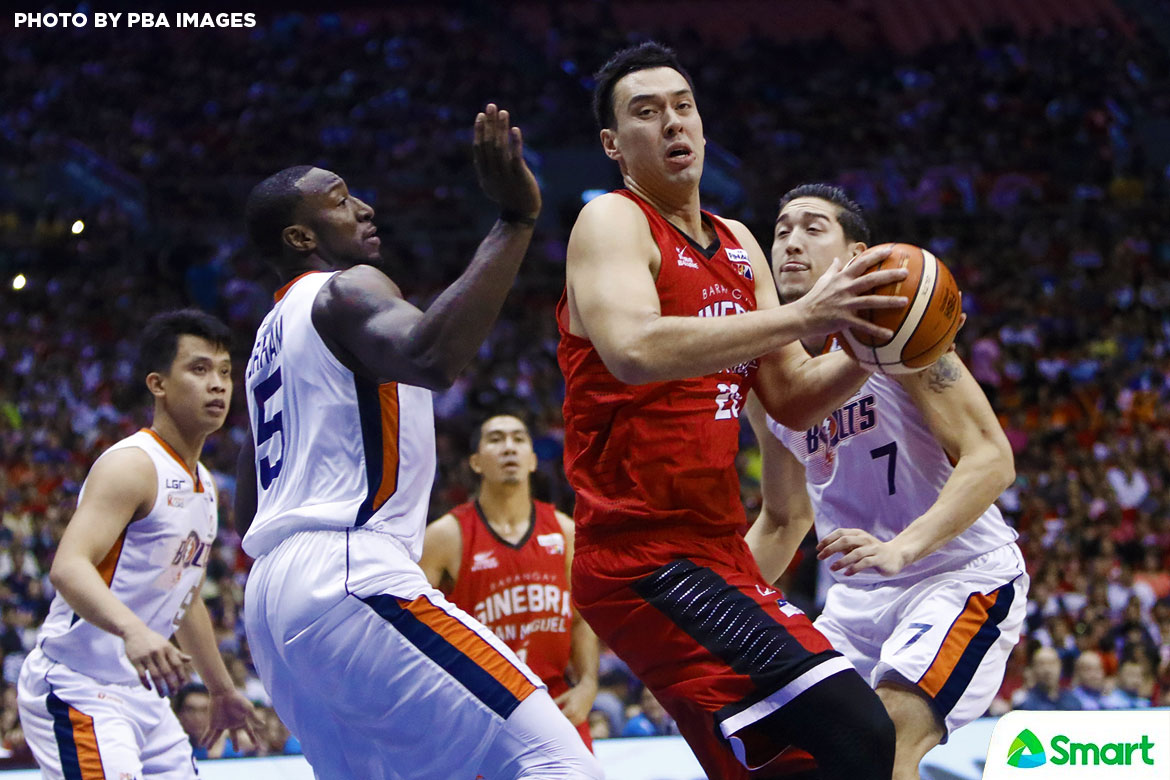 The Barangay Ginebra San Miguel have moved a win away from repeating as the Governors’ Cup champions, as they showcased their championship pedigree to down the Meralco Bolts, 85-74, Sunday night at the Philippine Arena in Bulacan.

The win serves as a huge way to bounce back after giving up a 2-0 lead in the race-to-four series, and the crowd darlings will have a chance to finish off Meralco in Game Six on Wednesday, October 25, 7:00 PM at the same venue.

“Meralco has done a really good job of grinding out wins against us, and that’s really what we’ve always tried to be about – a grind-out, defensive type team,” said coach Tim Cone, “And so we talked about getting back to that identity.”

Justin Brownlee spearheaded the Gin Kings’ attack with 20 points on top of 12 rebounds and five assists. Greg Slaughter played his best game yet in the series with 17 markers, 16 boards, and a game-high six blocks.

“Greg wasn’t making all of his shots but he was aggressive and physical and going after rebounds and that’s a big difference-maker for us,” lauded Cone of Slaughter, “And when he could do that, that changes the game for us.”

The Barangay were once ahead by 18 in the second frame, 33-18, but lost hold of the lead as the Bolts rallied back strongly. Ginebra then experienced being behind for the first time, 58-60, after Allen Durham’s bucket with 3:06 in the third. But the Bolts’s lead proved to be short-lived. Ginebra held their own, and a 10-1 run — capped by LA Tenorio’s crafty lay-up — that sent them up 84-71 in the final 2:32 proved to be the finishing kick to put the Bolts sleep once and for all.

Tenorio — who had gone scoreless in Game Four — supplied 17 points, six caroms, and four assists for Ginebra. Joe Devance also made his presence felt with 12 points on 50 percent shooting along with seven rebounds.

“LA played great,” said Cone. “He didn’t score in Game Four; he came out; had the first five or seven points in this game and sent a message that we’re out to battle, he was ready to go to war. I think that’s what our guys did.”

“We knew how important this game is. It didn’t win us anything but in a best of three series, it’s always important to win the first game,” pointed out the multi-titled tactician, who is on pace to collect his 20th championship in the league.

Durham carried Meralco with 27 points and 19 rebounds, as his local support failed to replicate their Game Four performances. Garvo Lanete was his sole back-up with 11 points on 3-of-12 shooting from beyond the arc.

Turnovers killed Meralco in Game Five, as they committed 20 turnovers, which led to 23 points for Ginebra. Moreover, their shooting went back to below 40 percent, as they only converted 36 percent of their shots from the field.

Now that the Barangay have the opportunity to close the series out on Game Six, Brownlee assured that he and his teammates are eager to do what has to be done.

“For sure, we’ll be fired up on Wednesday,” said Cone.

#ReadMore  With injuries piling up, Matias and Trollano step up for Rain or Shine