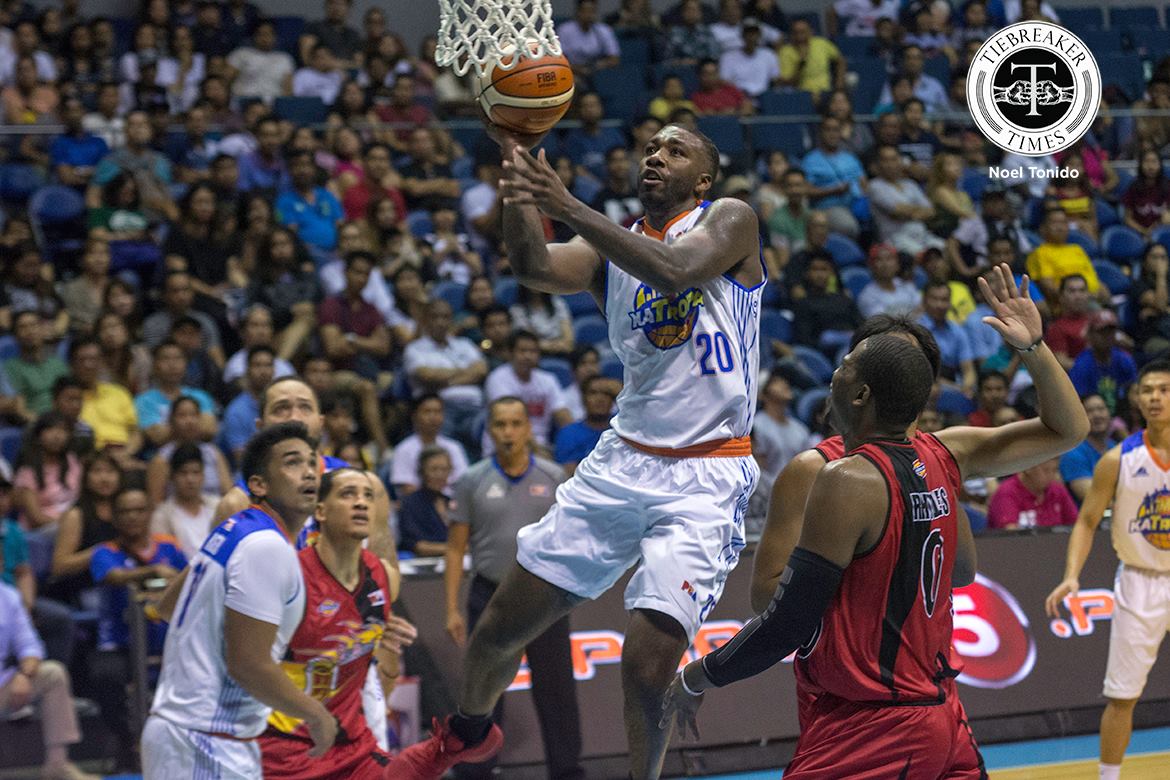 The Babyface Assassin lived up to his billing, and played a huge role in taking down one of the league’s giants.

The win brings the Katropa’s record to 6-2, and their victory has dropped the Beermen’s once-immaculate record to 5-1. With the game’s result, the 7-1 Meralco Bolts have now dethroned San Miguel for the top spot.

“I think we are fortunate na wala si June Mar. It’s nice na even if we lost three players due to Gilas, the guys were ready to step up and contribute. So malaking bagay sa amin yun,” said TNT head coach Nash Racela on the win.

Fonacier provided the huge blows, but the main man for the Katropa was import Donte Greene. The American import finished with monstrous numbers of 41 points spiked by seven triples alongside 21 rebounds. He also had two blocked shots.

“The contribution of Donte Greene was phenomenal,” lauded Racela of his import.

The sweet-shooting Fonacier proved to be the firefighter in the Beermen’s fiery runs. Just as SMB crawled back from 12 points down in the fourth period to knock within two, 100-98, Fonacier fired from the right wing to extend TNT’s lead to five, 103-98, with 1:26 left.

Fonacier’s streak reached up until the game’s waning seconds. When the Beermen seriously threatened once more, 107-101, the 34-year-old launched another trey, this time from the right corner, to lift the Katropa up 110-101 with only 30.8 seconds to go.

That shot proved to be the dagger in San Miguel’s hearts, as the Katropa got away with the nine-point victory.

Fonacier finished the bout with 14 points on 5-of-10 shooting, with four of his shots coming from beyond-the-arc. This breakout of his was very timely, as TNT will be playing without Jayson Castro, Troy Rosario, and RR Pogoy due to Chooks Gilas Pilipinas duties.

The Beermen were led by Charles Rhodes with 43 markers and eight rebounds. Chris Ross and Marcio Lassiter each supplied 17, while Arwind Santos made 11 markers.

San Miguel clearly missed the services of Fajardo, as they lost the rebounding battle, 58-46. However, TNT had more turnovers, 17-9 and SMB fed off it for 16 points.

TNT will try to win another one against Star on May 10, Wednesday, 7:00 PM, at the SM Mall of Asia Arena, while San Miguel will look to get back on track versus NLEX on May 19, Friday, 4:15 PM at the Cuneta Astrodome.

Rhodes on duel with Greene: ‘He’s scared to guard me’

Jazul proves worth in crucial win over Globalport